№121253 Badge of the Pilot and Lighthouse Department in Finland.

Jubilee Badge of the Department of Pilots and Lighthouses in Finland

Approved on May 18, 1912. A sign in the form of a laurel wreath. In the upper part there is a gilded double-headed eagle under the imperial crown with four cartouches (according to the number of fleets). Below is an image of a lighthouse with two flags of the Finnish Lighthouse Authority. The lighthouse is overlaid with an Admiralty anchor and a rudder with red enamel with gold dates "May 17, 1812-1912".

Fabrication of Eduard in Sankt Petersburg between 1912 and 1916, silver partly gilt and enamels, enamel painting, on the reverse of the wreath ribbons master's mark "BД" and Sankt Petersburg kokoshnik silver mark for 84 zolotniki from 1908 until 1917/26, with screwback, the oval metal plate and the screwing plate with master's mark "BД" and kokoshnik mark from 1908 until 1917/26, in its original case of Eduard. Size 49*35mm. 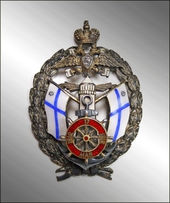