Russian Empire. Order (cross) of Saint Stanislav 3 class with swords, for military merit. Made by Eduard.  First officer's award for bravery (for military services) at the end of the First world war. They were awarded mainly to ensigns and sub-ensigns. 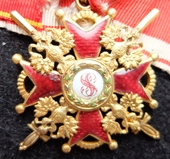