Russian Empire. Medal "For a march to China 1900-1901." It was established on 6 May 1901. The silver medal was awarded to: generals, officers, line and non-line lower ranks of all branches of troops and ranks of the maritime department, who participated in the fighting during the march to China in 1900-1901.

Silver. Diametr 28mm. Ribbon and suspension is a new made. 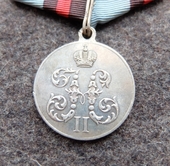